If there was any disappointment in the Missoula Paddleheads’ sound 8 to 5 victory over the visiting Ogden Raptors on Tuesday, it was only because Paddleheads first baseman Jayson Newman wasn’t the Beer Batter for the night.

The promotion, which reduces beer prices whenever the selected player for the night gets a hit, is a staple at Paddleheads games. Sadly, Newman, who went 2-4 at the plate in Tuesday’s game, was not the Beer Batter, and fans were left empty-handed.

“It’s one of the things that the fans love. They bring a lot of energy,” Newman said with a smile after the Paddleheads’ victory. “If I’m the Beer Batter for a game, let’s do it.”

Tuesday’s game saw the Paddleheads continue their winning ways from the first half of the season. The program already locked up a Pioneer League playoff spot after winning 35 games and the first-half pennant, awarded to the best team over the first 49 games.

This puts the team on pace for more wins than last year – and that team won the championship. Better than last year? That’s a bold statement. But it just might be the case, and the victory over Ogden improved the squad’s standing.

The win saw eight Paddleheads batters record a hit, led by Newman’s two hits and two RBIs. Missoula hitting coach Jeff Lyle had nothing but praise for Newman after the game. The first baseman added to his totals of 21 home runs and 71 RBIs, both tops in the entire Pioneer League.

“He’s the real deal,” Lyle said of Newman, whose sixth-inning two-run homer put Missoula up for good. “He’s the best hitter in the league, and I don’t think it’s even close – his power, his ability to put the bat on the ball consistently, and drive in runs when he has to.”

Newman was far from the only star for Missoula. Lead-off hitter Brandon Riley’s first-inning home run put Missoula up 1-0 early. Nick Gatewood followed up Newman’s sixth-inning blast with a homer of his own, capping off a two-inning stretch in the sixth and seventh when Missoula scored six combined runs to blow the game open.

McClain O’Connor tied Newman for the game leader in RBIs with a seventh-inning, two-run triple.

“It shows how long our lineup is,” Lyle said. “That’s one of our goals, to have everyone contribute every night, and something that we pride ourselves in is having a deep lineup of guys one through nine being able to hit.” 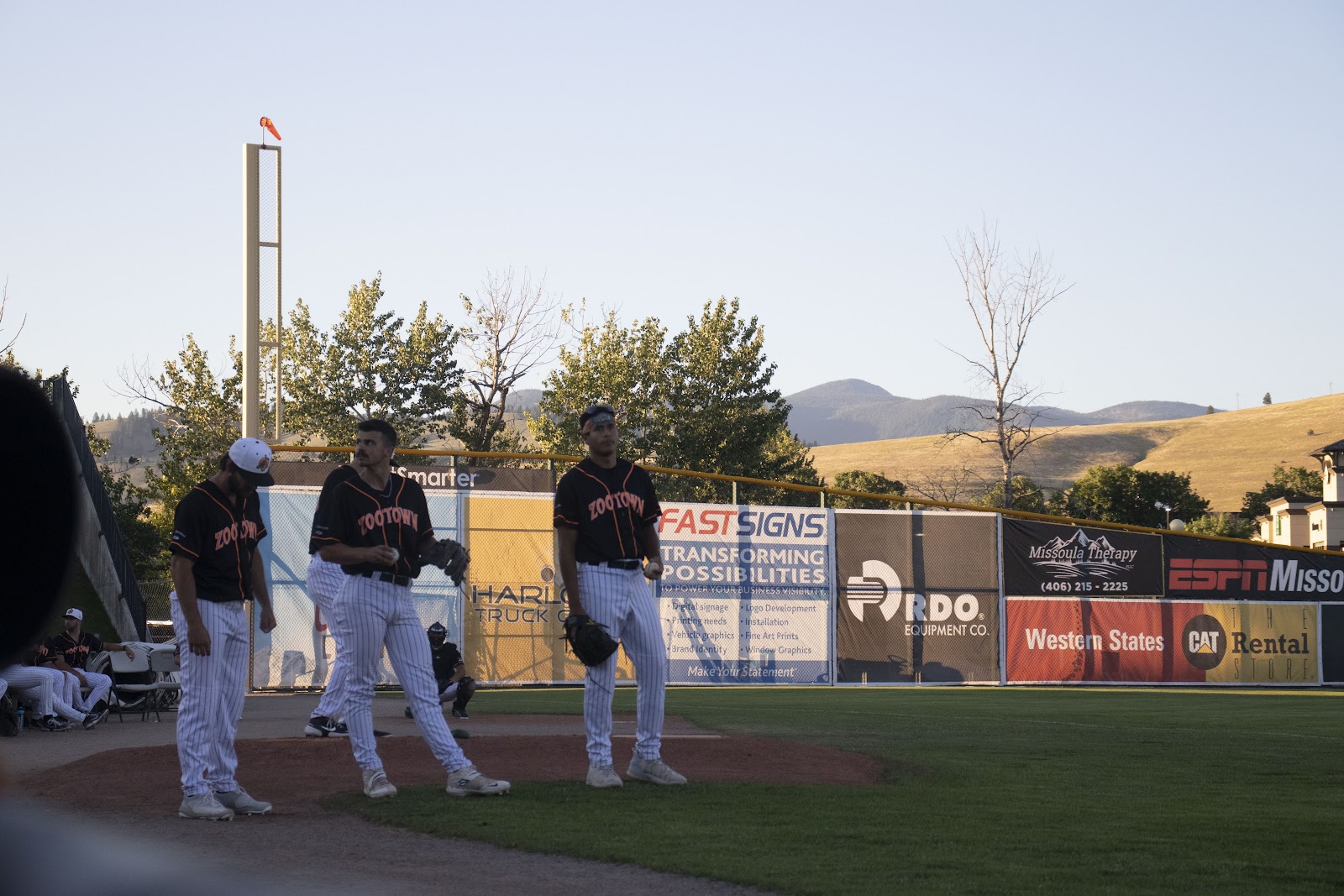 “One through nine, we’re excited every time we get up to the plate, you never know who’s gonna do the job. So we just pass it along and get the job done,” Newman said

If this game was any indication, the Pioneer League should be wary. The Paddleheads are talented, deep and confident, but the squad also recognizes that its job isn’t done yet. Newman said he is well aware of the possibility of a second-half slump, but he won’t back down from the challenge.

“It’s obviously a great thing to get into the playoffs in the first half. It can also be very scary to take a break, get off the gas pedal, but we do a great job showing up to the field, and we expect to win,” Newman said.

Ogden put up a fight against the first-half champs, even taking a 2-1 lead in the fifth inning. The lead would only stand for a single inning due to the torrent in the sixth and seventh, but Lyle (a former Ogden coach) recognized the threat the Raptors pose as Southern champions.

“They’re well coached, they’re very well disciplined, and they play the game the right way,” Lyle said of his former squad. “If I had to put any wagers on it, I would assume that we would see them in the finals.” 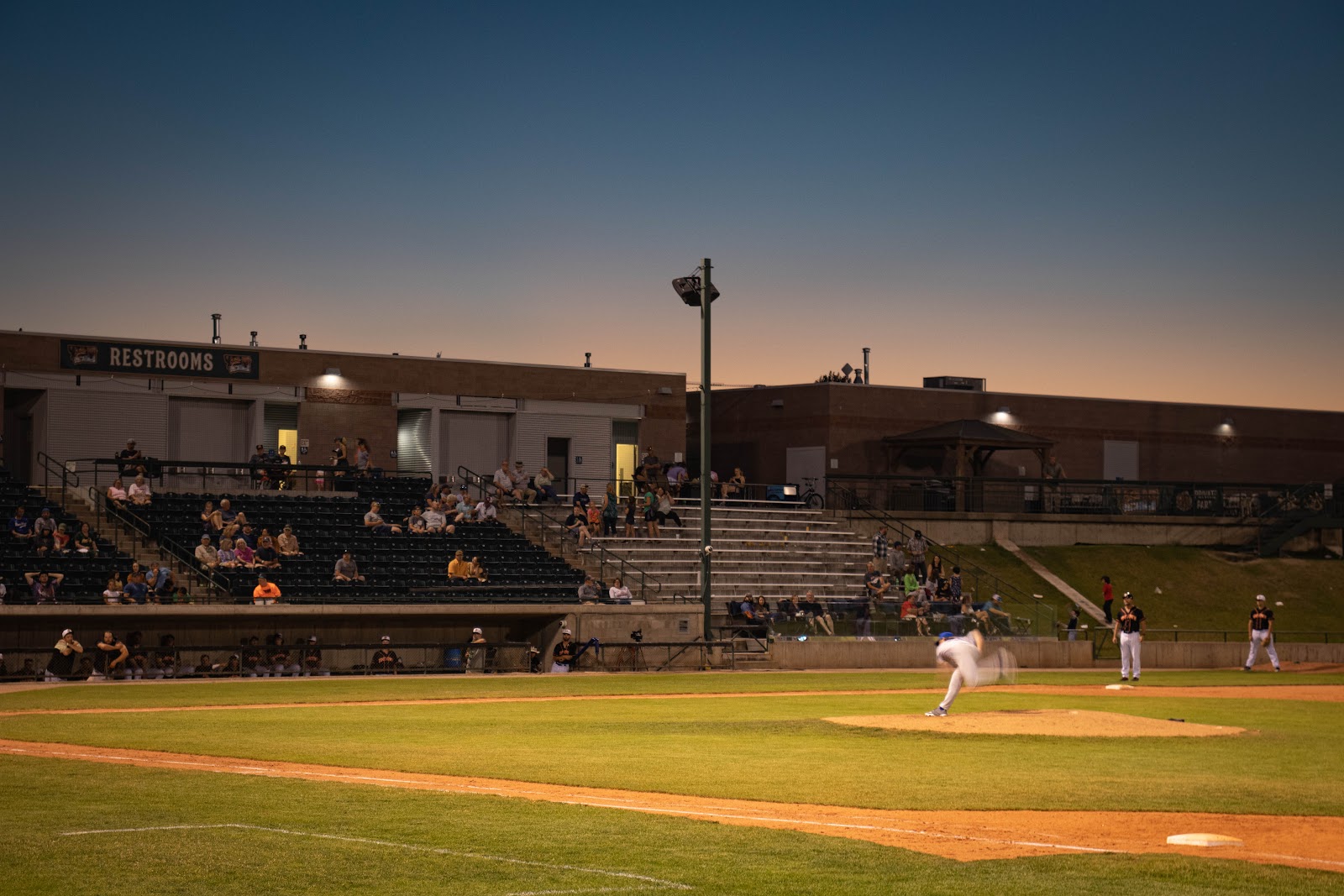 For now, Newman said the key is to simply continue what they do best.

“We stay with what we know we can do, and that’s up-and-down hitting, throwing strikes, playing good defense–that’s all we can control. So that’s what we all focus on and we keep it going,” Newman said.

If Tuesday’s game, the first of six at home against the Raptors, was any indication, the team isn’t satisfied with just one championship. It’s itching for another chance. Now, if only Newman could be the Beer Batter for every game.

Missoulians gathered to celebrate the community during the “Out to Lunch” event at Caras Park on Wednesday, July 20.

“(The Event is) Absolutely fantastic,” said Jim Fisher, co-owner of Lil’ Orbits donut truck. “It’s a great event and we get to meet people from all over the country. Everyone is in a good mood, and we get to have fun.”

For some, the delicious scented food wafted towards them, peaking an interest. For others it was the commotion, kids running around and music being performed, the overall general happiness of the crowd. For us, it was a chance to see what “Out to Lunch” had to offer. We immediately went on to explore, trying to find the food that appealed to us the most.

We found ourselves in the line for Isla’s Lemonade. The line was long, which resulted in us getting to know the participants around us. We were surprised by the friendliness of the others, one in particular who enthusiastically engaged in getting to know us as we got to know her. She even mistook us as sisters, which amused us.

After finishing up at the lemonade stand, we went on a hunt for food. This is when we came across El Cazador, a Mexican restaurant food truck. The line was lengthy, which is always a good sign, and it was sweet relief when we were finally able to order.

The workers were extremely friendly and though swamped, they kept the wait time to a minimum. We decided to order the nachos as it was a safe choice. They were jam-packed full of amazing spices and fresh ingredients that really hit the spot.

After eating this amazing food, we decided to ask people for suggestions. We wanted to get a taste of everything “Out to Lunch” had to offer.

We ran into our friend Evelyn Vigil, who pointed us to the direction of Madeline’s Mediterranean Grille and Street Food. The grill was also recommended by Abigail Moore, who ordered the baklava – pastry with nuts sweetened with syrup. She said the baklava was good, and reminiscent of pomegranate. Moore also informed us the workers were very nice.

We chose the Mediterranean platter, and found the dolmas – grape leaves stuffed with rice, lamb and beef – to be an acquired taste.

Once the eating portion of the afternoon was finished, we decided to shift our focus toward the live music performance.

The performer, Travis Yost, was very interactive with the crowd. Not only were his songs calming and mellow, which really tied together the event, but he also made a point to joke around with the audience to keep them engaged. He performed a mixture of original and cover songs, and made the “Out to Lunch” experience extremely enjoyable.

Even those of us with little money were able to enjoy the event. Coming from the wise words of a homeless man who would prefer to remain anonymous, “Music ties people together, you don’t need money to enjoy it.”

Overall the experience was incredible and many of our fellow journalists agreed with us. Events like these are about more than just food and music. They are  about reconnecting with the people you are normally separate from in everyday life. We are constantly working and striving to build and events like “Out to Lunch,” that enable us to take a minute to enjoy the people around us.

Ione Jean Lewis, a retired seamstress, said she worked in her dream job of making alterations.  However, Lewis’s first job was not in the sewing room, but instead in the nursery, and she had to put off her dream of being a seamstress.

“I should say my first job was taking care of my children,” Lewis said.

Lewis is a rare example of someone finding her dream job and actually working in that particular field. Lewis, and other Missoula residents interviewed on Wednesday around Caras Park and University of Montana in Missoula, reflected on their careers –  the differences between dream jobs and pragmatic responsibility.

Like Lewis, many other interviewees had not had the clearest path to their dream jobs.

Robin Joseph has worked in the housing office at the University of Montana for 35 years, but her dream job is to be a racecar driver.

Leo, who did not give a last name, wants to be a travel writer, but works as an independent consultant working in climate change for the time being.

When they grow up, Emery, attending Out to Lunch in Caras Park, wants to teach fifth grade, and Avery, also enjoying the event, wants to write chapter books.

Jeff Stevens’s dream job is to work on Carving at the Carousel.  This job consists of volunteering in the shop while carving wooden horses and animals for other carousels.

“My dream job: Carving at the Carousel.  I have been a volunteer there for 25 years,” Stevens said.

Heidi Webber wants to be an author, and wants to write novels about life.

“To write is probably my dream job.  The idea is to sit and write,” Webber said.

Melony, no last name given, followed her dream and is now working in her dream job.

“I am a college prep coordinator at the middle school and high school,” she said.

Kimberly Sloan wants to be a life coach and wants to help working mothers. She, like Lewis, understands the difficulties of juggling work and family.

“Specifically mothers, working mothers, and how to balance a job and a fulfilling family life,” Sloan said.

Lewis, the retired seamstress, and Joseph, the aspiring race car driver, had different plans in life, and went through different courses to turn to who they are today.  Both have had a long career in the field they chose and have enjoyed their work.