Seven journalism students face a bank of screens, and with only a few minutes to go before recording starts, the atmosphere is busy and tense. This is the control room of UM News, a weekly news segment staffed by senior broadcast journalism students. 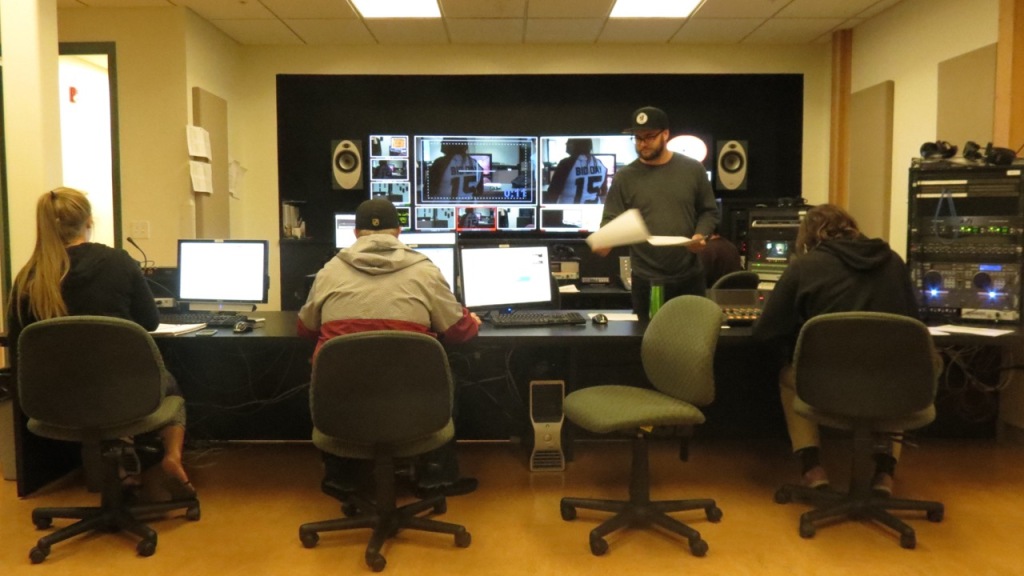 Though the students are producing their broadcast in the Don Oliver Television Studios on the first floor of the journalism building, the segment airs each week on KPAX-TV and ABC Montana.

“Are we almost ready to go?” Sean Robb asks his colleagues, who are busy cueing instruments. Robb, who is from California and will graduate next spring, is working as a producer today. Other days he is chasing stories as a reporter, in front of the camera as an anchor, or behind it as a cameraman.

“It’s really good experience to do something over and over each week,” Robb says, adding that the practice makes him more efficient at reporting and producing. The pressure to produce in UM News is intense, he says, in a way that reflects the working world of a broadcast journalist.

Associate Professor Ray Ekness, a former broadcast journalist himself, agrees that the program simulates the pressures of the working world. Students do get the buffer of two dry runs before they record the broadcast that will air on television, which is a safety net for the learning students he said. The semester in UM News includes a broadcast filmed without dry runs as well.

Silence descends on the control room as the team keys in the cameras. Today’s director is Joe Hodgson, a senior from Great Falls, Montana who spent his summer interning at Comcast Sports in San Francisco. “Go ahead and pan to the right ever so slightly,” he directs his cameraman, watching on the screens in front of him.

On Friday, the students will meet with professionals from KPAX-TV and ABC Montana for a review of the week’s broadcast. They’ll learn the tricks of the trade and how to streamline their next show.

“Go ahead and roll thunder, full sound!” Hodgson orders, and the broadcast is under way.

Wednesday, October 28th at 12 p.m. UM J-School professor Henriette Löwisch will speak about her home country Germany as a part of ‘Walking on Water: The Refugee Crisis and European Contradictions,’ a presentation sponsored by the Central & Southwest Asian Studies Center. Löwisch’s talk is focused on Germany’s leadership role in the European refugee crisis, and echoes efforts in the journalism school to tell stories of immigration and human movement.

Löwisch came to the journalism school after a career with the international wire service Agence France-Presse, and will be co-leading a study abroad program in Berlin this summer, where she lives when not in Missoula. The trip is directed by the School of Journalism and will focus on telling stories from the refugee influx to Germany.

“The trip will be a model for how future study abroad programs can work: follow the news to tell big stories around the world,” Löwisch said. Seventeen students have signed up for the program thus far.

Stories of human migration are also present in Montana, and this fall semester students in the Advanced Multimedia class have been seeking out immigrants in Montana to report on what brought them here and on adjusting to a new life in the state. The project includes past refugees, as well as those who immigrated to Montana for other reasons.

Shanti Johnson, a graduate student in the class, has been working with a family of Vietnamese refugees in Missoula. “I’m being led into a world of Southeast Asian traditions and histories I never expected to find this far north,” she said.

As for Löwisch upcoming talk, she believes that Germany and its Chancellor Angela Merkel are at the epicenter of a refugee crisis of historic proportions, reshaping the country as well as Europe. “Merkel has undergone a dramatic transformation in terms of political goals. I’m looking looking forward to explaining Merkel to my fellow Montanans,” Löwisch said.

Find out more about the event here.

For Kevin Van Valkenburg, Senior Writer at ESPN the Magazine, stories are “a time machine that can heal the world.”

Van Valkenburg, who graduated from the UM School of Journalism in 2000 and has come back as this semester’s T. Anthony Pollner Distinguished Professor. He spoke to an audience that filled both the seats and the stairwells on Monday night. His speech focused on the continued value of good storytelling, in an evolving landscape for media.

“It doesn’t matter the format you tell it in, as long as you tell it true and you tell it well,” Van Valkenburg said, advising students to reject the negative outlook some are pinning to written journalism, which he called “a cynical narrative.” Van Valkenburg said changes have come not to storytelling itself but to the economic model that supports it. Despite the distractions of modern life, he said, people remain hungry for heart-felt stories.

Speaking with clear reverence for the power of good narrative writing to explain, humanize and heal the challenges of the day, he extolled students to think about why stories are told and search hard to find them. “There are no stories to be told in life’s safe harbors,” he said.

A native of Missoula, Van Valkenburg is the first alumnus of the school to hold a Pollner Professorship, a program which brings talented journalism professionals to the J-School for a semester. The program began in 2001, when Anthony Pollner, a graduate and former staff member on the Montana Kaimin, died in a motorcycle accident.

Van Valkenburg and Pollner were friends and co-workers at the Montana Kaimin during their shared time at the University. At several points in his speech Van Valkenburg referenced the spirit Pollner had brought to his journalism studies, and how it had inspired Van Valkenburg in his own career.

Recounting some of the more memorable stories of his career, first with the Baltimore Sun and then with ESPN the Magazine and ESPN.com, Van Valkenburg spoke about learning lessons on what stories can do for their subjects, as well as their readers. He recounted an early story he wrote about a girl’s suicide, and how her mother had thanked him, saying she could now explain her daughter’s life and death to friends by sending them Van Valkenburg’s article.

It’s a two way street however, Van Valkenburg noted. In response to a question from the audience, he said that whether to use sensitive information given by a source can depend on both its content and impact. If there are larger societal questions at stake, Van Valkenburg said, “I’m going to upset the source and I’m going to reach for the truth because that’s more important.”

Van Valkenburg concluded his speech by speaking directly to Anthony Pollner’s friends and family, who sat amongst the first rows of seats. He shared stories and memories of Pollner from their university days, which he said his return to campus has helped to bring back.

“Few things in my life have ever seemed less fair,” Van Valkenburg said, speaking on the passing of his friend, “but by telling those stories I keep a piece of him alive forever.”

The full text of the speech can be found here.