The new edition of Montana Journalism Review tracks Western journalists as national and global events push them past their comfort zones.

From local coverage of refugee resettlement to an experiment in right-wing news immersion, the 2017 issue of MJR scrutinizes how news professionals are responding to growing distrust in the media and ongoing changes in the industry.

“With the proliferation of fake news and echo chambers, we worked hard to find stories that advance the conversation and show the state of the media in the western United States,” Managing Editor Claire Chandler said.

Over the following seven months, student editors, writers, photographers and designers learned how to problem-solve and work together as they brainstormed story ideas and headlines, recruited contributors, sold ads and got the 68-page book ready for print.

In October, final drafts were sent off to Copy Chief Taylor Crews, who organized her team for the stringent fact-checking and copy-editing process. Designers got their hands on copy in early November and faced a quick two-week turnaround.

In addition to the print magazine released on Dec. 16, 2016, MJR published its stories on its website at mjr.jour.umt.edu, under the leadership of Web Editor Matt Roberts. It also produced Framing a Movement: The Media at Standing Rock, a web documentary orchestrated by Senior Editor Kathleen Stone and funded with the help of the J-School’s Blumberg Fund for Investigative Journalism and UM President Royce Engstrom.

Montana Journalism Review is the product of a journalism capstone course offered each fall. The magazine is financed through ad sales and support from the School of Journalism. The print edition is sent out to 750 subscribers across Montana, the nation and the world.

About a dozen University of Montana School of Journalism alums and current students have travelled to southern North Dakota to cover the Standing Rock protests against the Dakota Access Pipeline throughout the fall semester.

As September’s balmy weather turned into December blizzards, UM journalists camped out on the plains to help report on this movement, which hoped to stop the construction of a crucial link in a 1200-mile pipeline.  They dealt with huge logistical challenges: limited internet access, freezing cold, long distances, and of course the uncertainty of not knowing where the story was going.

School of Journalism alums are covering the issue for various news outlets throughout the country, including NPR, PRI’s The World, Minnesota Public Radio, Lee Enterprises and the Billings Gazette.   Currents students have also filed for Lee, the Montana Kaimin, and for Montana Journalism Review, a publication of the J School.

“This is the most historical event I’ve had the great opportunity of covering in my young career as a visual storyteller,” said spring 2016 graduate Bronte Wittpenn, who is now working for the Billings Gazette. “There has never been a gathering of Indian nations like this in my lifetime.”

Evan Frost, who also graduated last spring, was part of a group of alums covering the event on Dec. 4, when the Army Corps of Engineers announced it was going to study alternative routes for the pipeline.

“History was made on Sunday and I was there to witness it,” Frost said. “The camp will change, people will continue to protest and I’ll keep taking pictures. Like the soot in my lungs, these experiences will stay with me long into my journalism career.”

2014 graduate Amy Sisk has been covering the encampment since August for Prairie Public Broadcasting,  which is based in North Dakota. Sisk had postponed a vacation to cover the pipeline protests.  When she did finally did decide to take a break, the story caught up with her: she found herself in the airport on the weekend the Army Corps made its announcement that pipeline construction would stop.

“I wanted to run through the airport screaming in anger because I missed being on the ground when the news broke,” said Sisk, who scrambled from the Minneapolis airport to contact key players so she could file a story.

Reporting in her stead at the camp was Nicky Ouellet, who earned her master’s degree in journalism in 2016. Ouellet spent a week at the camp and noticed that reporters have to be very careful when covering sensitive issues like the Standing Rock movement. An improperly worded headline suggested the North Dakota governor would put up a “blockade” in an effort to keep out tribal supporters.

“I know people are eager to find news articles and match their existing beliefs, but I was still startled by how people could continue to treat one mistake as a fact,” Ouellet said. Standing Rock coverage is complex and requires dedication from all news outlets, Ouellet said. “In one week, it’s not possible to cover the entire history of DAPL or the Standing Rock Sioux. Instead I focused on one tiny sliver of what’s happening and tried to (include) as much context as I could.”

Tailyr Irvine, a current student, traveled to Standing Rock three times throughout the fall semester for the journalism school, and just returned from her most recent trip. These visits gave her experience that is impossible to get in the classroom, she said.

“I’m extremely grateful to be able to be a part of a program that recognized the importance of these experiences and provides the funding and understanding that allows me to learn outside the classroom,” Irvine said.

In total, at least a dozen School of Journalism students and alums have covered portions of the Standing Rock story. Among the first to cover the event was a group of students representing the Montana Journalism Review, a class taught by professors Henriette Lowisch and Keith Graham.  The magazine publishes December 16 as does the Standing Rock web documentary http://features.mjr.jour.umt.edu/

Nearly all the UM journalists are also alums of the program’s Native News Honors Project (http://nativenews.jour.umt.edu), a spring class taught by professors Jason Begay and Jeremy Lurgio.  Native News has sent students to cover news trends throughout Montana’s reservations for the past 25 years.

“This precisely reflects the mission of both the journalism school and projects like Native News,” said Associate Professor Jason Begay. “We want our students to be confident in covering these often overlooked news stories affecting overlooked people with both accuracy and sensitivity.”

For links to student coverage:

Coverage in the Montana Journalism Review

Coverage in Lee Newspapers in Montana

For links to Alumni coverage in various publications:

UM J School students and alums have been covering the protests at Standing Rock since last September… and the onset of winter hasn’t slowed them down.  Student Tailyr Irvine was out at the North Dakota camp this past weekend when the Army Corps of Engineers announced a halt to construction.  She’s been joined by alums Amy Sisk, who reports for Inside Energy and NPR, Nicky Ouellet (MTPR), Bronte Wittpenn (Billings Gazette), Evan Frost (MPR) and others.  The J School prides itself on learning through doing, and the Standing Rock assignment has shown our reporters are ready to file, no matter what the temperature is. 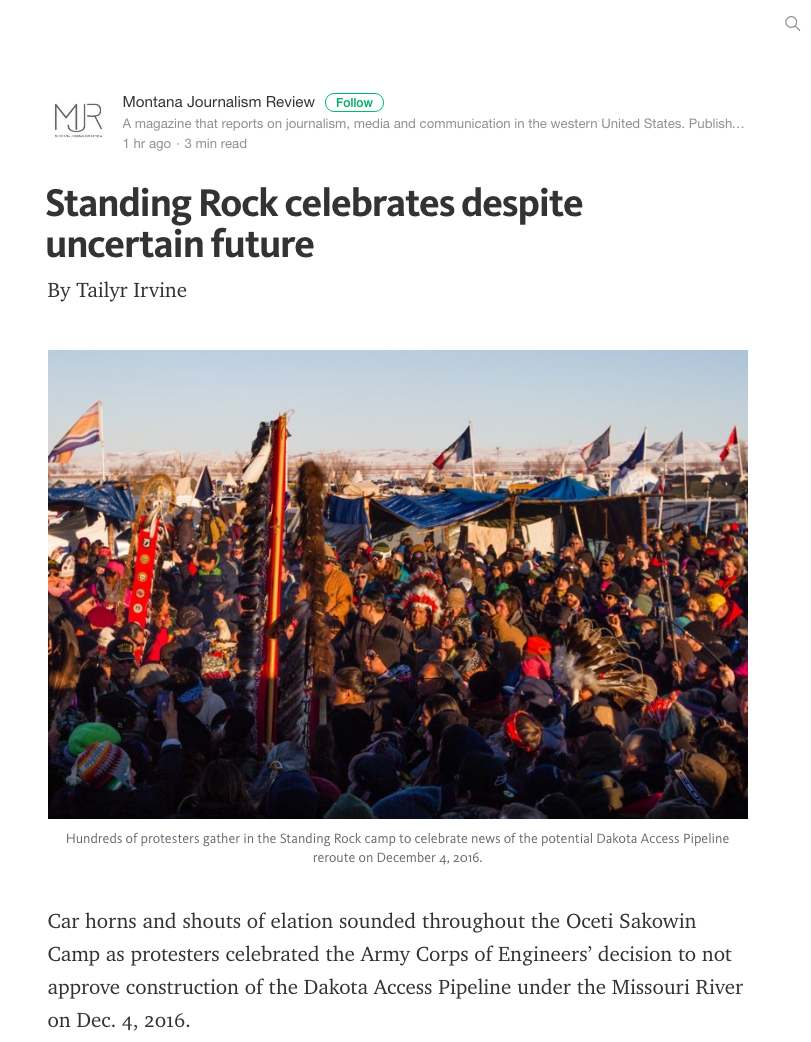