A week ago, the Society of Professional Journalists (SPJ) released its Mark of Excellence awards, and 15 UM journalism students were announced as category winners in Region 10, encompassing Alaska, Idaho, Montana, Oregon and Washington. Yet even more J-school students received acknowledgment for their work, recognized as finalists in those same categories.

“The wide range of projects that we’re being noticed for includes the entire spectrum of journalism, covered in these awards, and that’s pretty cool,” Ray Ekness said, professor and director of student success.

Professor and director of faculty affairs, Dennis Swibold agreed. “It just seems like the whole gamut of what we teach is getting national honors,” he said. “If we’re not just good, but good at lots of things, that proves we have a well-rounded program.”

SPJ set their standards high and stated that in their contests, if none of the entries received rose to a level of journalistic excellence, they would refrain from giving out that award. However, UM students rose to the challenge and received recognition in categories that covered photography, reporting, writing, radio, online and television pieces. Six of these students were selected for at least two different projects, and some even received awards in different mediums.

“To see it happening across the range is very rewarding. We’ve encouraged them to be more than one kind of journalist and it shows,” Swibold said. “Students are becoming ambidextrous and proving that they work well across different mediums.”

Swibold cited senior Sojin Josephson as the apex example for accomplishing exactly that. Josephson won in the sports writing category and was a finalist in the television feature and television general news reporting categories. Her winning piece, “Kicking and breathing: Daniel Sullivan’s body quit football, but Sullivan couldn’t quit the game,” which she wrote for the Montana Kaimin, will go on to compete at the national level.

The 14 other winners also compete at the national level against students from different regions and recognized in the same category.

Not only were students’ individual projects honored, but the SPJ recognized UM’s Student Documentary Unit and the UM News class for their collective work.

“In class, students aren’t just talking about doing journalism, they’re going out there and doing it—class work is extended beyond class,” Swibold said. “I’m proud to see the fruits of last year’s labor pay off. There’s a lot of excitement in the department right now. We’re small, but we know the students and we’re very accessible to them.”

The UM School of Journalism is currently ranked 8th in the nation and celebrated its centennial birthday in 2014. National winners in the SPJ 2015 Mark of Excellence Awards will be announced later this spring, and will be honored at the Excellence in Journalism convention in New Orleans, running from September 18th-20th.

One day in JRNL 100, Mason Birgenheier stood in front of the class and announced that KPAX-TV was looking for production help. He had been working afternoon shifts at the station, serving as a production assistant, when Ethaniel Fitzgerald heard his announcement. Fitzgerald soon landed a position at KPAX, helping manage and produce The Morning Show, clocking in at 3am and then leaving straight from work to go to class. 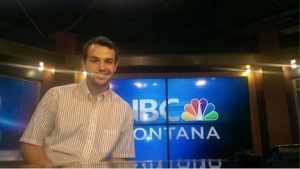 Now, three years later, both Birgenheier and Fitzgerald have won NATAS scholarships for their dedication to the broadcast industry.

The goal of the National Academy of Television Arts & Sciences (NATAS) scholarship program is to support promising students in their pursuits in the television field of journalism. As part of the award, winners travel to Seattle, Washington in June for further recognition and to go behind the scenes in a larger newsroom.

The UM School of Journalism has a long history of broadcast majors receiving NATAS scholarships. Of this year’s winners, Ray Ekness, Professor & Director of Student Success, said, “Both Ethan and Mason are exactly what the NATAS folks are looking for. They’re smart, take feedback well, are willing to learn and have been working hard at local television stations.”

Currently, Birgenheier and Fitzgerald work for KECI-TV, a local subset of NBC. Birgenheier mostly focuses on the production side and said that the team’s atmosphere revolved around the word ‘hustle.’ “It’s so fast-paced and you’re constantly on your toes,” he said. “But when something happens, you’re the first ones to know.”

As someone who grew up in Missoula, Birgenheier said that he enjoyed using his technological skills to keep people up to date with the local news. “I like knowing what’s going on in my community,” he said.

While Fitzgerald also has substantial production experience, lately he’s been working as KECI’s weekend sports reporter. He said the position functioned at a different pace than the news, but it was still fun and exciting.

Fitzgerald won NATAS’s specific Tricia Moen Scholarship, which emphasizes the producing and writing aspects of broadcast journalism. This scholarship honors Tricia Moen, a producer at KOMO-TV in Seattle, who continued to work even after being diagnosed with Stage-4 cancer. During the NATAS application process, Fitzgerald researched her story and felt touched by her journey. “I had goosebumps,” Fitzgerald said. “I wanted to be better at my job because of her.”

Yet Fitzgerald’s inspiration at the J-school came from Ekness, who gave him technical advice and pushed him to be a better journalist. “He’ll do anything for his students,” Fitzgerald said.

Birgenheier agreed. “I’m thankful to a lot of people, but especially Ray,” he said. “I owe a huge kudos to him.”

“I’m very proud of what they’ve accomplished,” Ekness said. “I’m looking forward to the great things they’ll do in the future.”

For Fitzgerald, the future revolves around finding a news team that works well together. “I like anchoring and being behind the scenes,” he said. “I want to have a lot of skills, and [someday] I’d like to just be able to roll the dice and go there.”

When Birgenheier started at UM, he didn’t see himself as a journalist. “But now that I’ve found it, I know it’s always been a part of me, “ he said. “I hope to anchor someday, and I feel more confident after winning this scholarship. It’s taken a lot of hard work to do this and to feel like someone actually noticed, is awesome.”

As both students head into their senior year, they plan to keep working at KECI and gain as much experience as possible from their jobs and from their classes. In 2016, the UM School of Journalism was ranked top-ten in the nation, and Birgenheier felt obligated to keep that reputation strong.